Danny Martin is a theologian with an emphasis in Ecology. He is a principal creator of Mindfulness-Dialogue which has been used, worldwide, by groups and organizations to assist in leadership development, team building, program development, and cultural enhancement.

In 1973 Danny brought Dialogue to his work as a Catholic priest in Kenya. In 1981 he attained his Licentiate in theology at the Gregorian University in Rome. When he left Kenya in 1984, he continued to develop Dialogue as a Religious Advisor to the United Nations Environment Program. In this role, he helped create a process to engage the religions of the world through an initiative called The Environmental Sabbath. In 1986, under the mentorship of Dr. Thomas Berry, a pioneering Cosmologist, Danny earned his doctorate in Theology from Fordham University. Having left the priesthood in 1990 Danny became the Director of The Global Institute at Wainwright House, in Rye New York. While there he received a grant from Laurance Rockefeller to travel several continents engaging local environmental and religious leaders to create an Earth Charter. The Charter was presented in 1992 at the United Nations Earth Summit in Rio de Janeiro, Brazil.

In 1994 Danny established Cross River Connections where he continued to deepen the art of Dialogue by integrating the practice of mindfulness into an integral method known today as Mindfulness-Dialogue. He has brought this method to institutions such as the CDC, American Heart Association, Connecticut Council of Family Service Agencies and Jefferson Memorial Hospital.

Danny was a founding member of many environmental initiatives such as Sound Waters, in CT, Greenbelt Safaris with Wangari Maathai in Kenya, and Conversations for Action, in Bedford NY, which has since become Bedford 2030. Danny continues to bring his work to programs such as The Thomas Berry Forum for Ecological Dialogue at Iona College where he is also animator of the Thomas Merton Initiative. He serves as a consultant at institutions such as Greenwich Academy, Greenwich Psychotherapy and Associates, Talmadge Hill Community Church, Katonah Meditation Group, the Leatherman’s Loop and Creative Conversations.

Danny lives his life as a student of poetry, music and language. Wherever Danny lived, he immersed himself in the culture by learning the language: Gaelic, French, Swahili, Kikamba, Italian and ‘American’. Danny grew up in Belfast, Ireland and resides in Cross River, New York with his wife, Ann D’Elia. 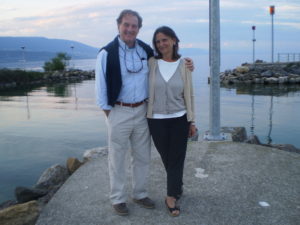